Why does my vagina smell?

Whatever you call yours, have you ever given much thought to what it smells like? The chances are you haven’t, until something smells … different.

What does it smell like, and what could be causing it?

Bacterial vaginosis (BV) is a common cause of unusual vaginal discharge, which can be greyish in colour, watery, and smell strongly of fish (especially after sex). It isn’t associated with itching or soreness.

In fact, half of women with BV have no symptoms at all! It’s caused by a change in the normal bacteria that live in your vagina, and is not a sexually transmitted infection (STI). Some things that could help prevent BV include having showers instead of baths, and avoiding perfumed soaps and bubble baths when washing down below (water and plain soap will do!).

Douching can also affect the normal bacteria in your vagina and predispose you to things like BV. If you think you have BV, please speak to your GP or sexual health clinic who may – but not always – want to take a swab. It is usually treated with antibiotic tablets, or occasionally vaginal gels or creams. It’s especially important to speak to someone if you have soreness or itching down below, in case it is trichomoniasis (an STI) that is causing your symptoms.

Vaginal discharge which smells bad could be suggestive of pelvic inflammatory disease (PID). PID is an infection around the female reproductive organs, such as your womb, ovaries or fallopian
tubes. Many different types of bacteria, including chlamydia or gonorrhoea, can spread upwards from your vagina to cause PID.

Many women don’t have any symptoms at all, but some have pain in the lower part of their tummy, pain during sex, pain when going for a wee, bleeding between periods or after sex, or unusual vaginal discharge which may or may not smell. It is very important to discuss these symptoms with your GP or sexual health clinic, and to do so urgently if you have severe pain in your tummy, a high temperature or feeling sick or vomiting (this might mean a trip to A&E).

Swabs are usually taken to see what bacteria is causing the infection, and it is treated with antibiotics. It is important to avoid sex while you’re being treated, and recent sexual partners might need to get tested to avoid passing the infection on. It’s important not to sit on these symptoms as sometimes, if left untreated, there can be scarring of your fallopian tubes which could have implications if you want to get pregnant in the future. You can reduce your risk of PID by using condoms.

Did you remember to take out your tampon? Of course you did …didn’t you? You’d be amazed how many women think they have, but forgot. It’s easily done, especially at the end of your period, or if you forget to remove it before inserting the next one. Sometimes the tampon can get squished at the top of your vagina and be more difficult to feel. It can’t get lost, it will still be in your vagina. Due to vaginal secretions, old blood and bacteria, it can get pretty smelly.

Don’t panic. Lie down, and have a gentle feel. If you can’t feel anything but suspect something is stuck, or if you can feel something but can’t remove it, please contact your GP or sexual health clinic, or call NHS 111 for advice if you can’t access either of these services. Don’t worry; they will have dealt with this before, you’re not the first and certainly won’t be the last. It’s important to get it removed quickly if you have an unpleasant smell or discharge, pain low down in your tummy, or if you’re feeling feverish or unwell.

Toxic shock syndrome (TSS) is a very rare condition which is associated with tampon use. It’s very uncommon, but if you notice fever, nausea, vomiting, diarrhoea, rash, flu-like symptoms, feeling faint, or difficulty in breathing, it’s important to seek medical attention, or go to A&E if your symptoms are severe or worsening.

Fungal infections caused by yeasts can sometimes cause some odd smells down below, but more often than not they don’t smell at all. It’s common, it’s normally harmless and is not classed as an STI. You might notice whitish vaginal discharge (which is often thick, like cottage cheese … yum), itching down below, or soreness during sex or when you wee.

As with BV, you can help prevent thrush by avoiding soaps down below, taking showers instead of baths, drying properly after washing, and wearing cotton underwear. You should speak with your GP or sexual health clinic if it’s the first time you’ve had symptoms, if you’re under 16 or over 60, if it keeps coming back, if treatment didn’t work, if you’re pregnant or breast feeding, or if you have a weak immune system (like if you have diabetes, HIV, or are on chemotherapy). They might want to take a swab, rule out other causes of your symptoms, or see if there is a reason why you have thrush. If none of these things apply to you, a pharmacist might be able to help.

You’ll need some antifungal medication to get rid of it, which could be a cream, vaginal pessary or tablet. It’s best to avoid sex until it’s cleared up in case you pass it on, but your partner doesn’t need treatment unless they have symptoms. Beware: antifungal cream can damage condoms and diaphragms.

You can sweat in the area around your vagina, just like anywhere else in your body. Sometimes this can produce a musky smell.

Try to wear less synthetic materials, and give cotton a go instead to allow sweat to evaporate more easily. This goes for sanitary towels and pantyliners, too, which are available in 100% cotton, as are period pants. Looser clothing can also really help. Changing your clothes and underwear after exercising might provide relief, as can having a shower (but no soaps, remember?!).

6. It smells … sweet or pungent

While not scientifically proven, it is widely reported that certain foods can alter the way you smell in the land down under. Processed foods, pineapple, onions, garlic, certain spices and vinegar
are just a few of the foods that have been reported to change your smell.

Things like asparagus can make your pee smell too, which would be mistaken for a vaginal odour.
I’ll leave you to make up your own mind about this one!

Dr Hannah Missen is a mummy to Primrose, and a general practitioner (GP) with a previous background in obstetrics and gynaecology. She has particular interests in research and academia, medical ethics and law, and women’s health. 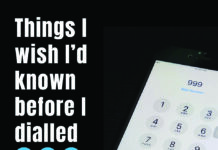 Things I wish I’d known before I dialled 999

A Platinum Journey Through Time

Keep up to date

What are the positives we can take from the COVID19 virus?